Seven experiences of Vipava through its sights 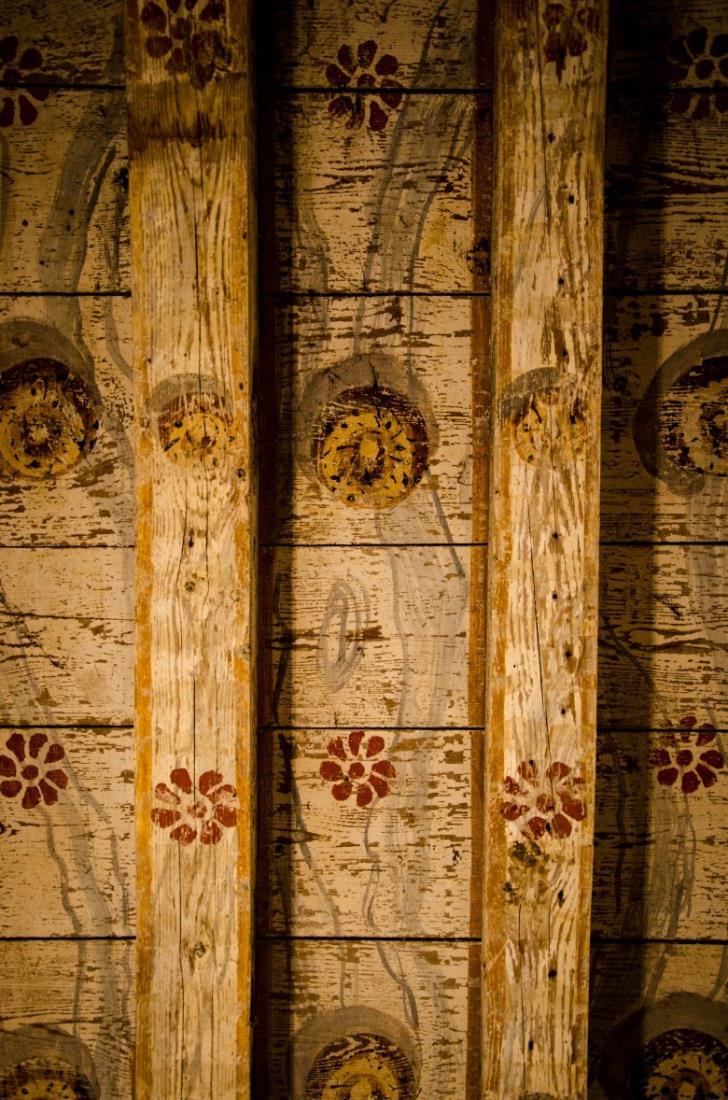 Vipava is mentioned in written sources of various periods. And every period has left its mark on the area. This is why we take the liberty of emphasising again and again how rich a history our Vipava carries within itself.

Continue reading if you want to know how to get educational experiences through a sightseeing tour.

So let's start. The first such experience is visit to

Over time, many noble families made Vipava their home. It is perhaps precisely the Lanthieri family that has left the largest mark in the town. The mansion in the very centre of Vipava, built in 1659, bears witness to their lengthy stay in our area. Interesting frescoes and paintings have been preserved in it.

The paintings in the great hall have a decorative role, as they originally complement the oil paintings that were placed in the middle. The middle part on the ceiling, where there a white rectangle today, used to be decorated with an oil painting with the motif of a mythological creature. There were also oil paintings on the walls, but it is not known where they are today.

The paintings on the ceiling, which due to the Baroque fresco technique has been preserved much better than the wall paintings and window head paintings, originate from the late Baroque period, i.e. 18th century, and is about a century younger than the paintings in other rooms.

The motif of grapes and apples and vine and apple tree leaves can also be found on the ceiling paintings. Such motifs are not found on the older paintings in the mansion, either due to some parts of the paintings missing, or due to a different style of painting. You can visit the interior of the mansion as part of a guided tour of Vipava with our local guide, every Monday and Wednesday at 5 p.m. and every Friday at 1 p.m.

During their reign, the Counts of Lanthieri were also the owners of Slap Castle and the mill in Slap. The first Slovenian winemaking and fruit growing school had its premises in the castle during the period of the Duchy of Carniola. This is because the owner at the time, Count Karol Lanthieri, ceded the premises and part of the estate with vineyards free of charge.

What if we continue our journey in the

Viticultire in the Vipava area was developed even before the arrival of the Romans. Located in the vaulted cellar of Lanthieri Mansion, the Winemaking Museum Vipava presents comprehensive collections of grafting, viticulture and winemaking.

It also displays sources about the technological procedure of processing grapes into wine and about wine culture, i.e. about how wine is served and brought to the food that accompanies it. On the other hand, this museum follows the development of viticulture throughout history and bears witness to the rich tradition of cultivation of vines in the Vipava area.

The number of items in the museum is changing, as people still bring their own items that they want to be part of the museum's story.

Older locals still call Vipava trg (market) to this day. It is under this name that Vipava is recorded in a document from 1367, when the local people acquired the right to their own fair. The market flourished between the 17th to the 19th century. A rich architectural heritage was created along the main road between Gorizia and Ljubljana at the time, which is still evidenced by well-preserved architectural and stone masonry details. The Old School was built in 1861 under the leadership of Vipava Dean Jurij Grabrijan. The monumental two-storey building with a five-axis façade has the rustically decorated ground floor and two storeys separated by a collar and decorated by four Tuscan pilasters of the colossal order. There is a profiled stone portal with entablature supported by a pair of volute corbels in the main axis. Memorial plaques are built in at the entrance: the left is dedicated to Štefan Kocijančič (1818-1883), a priest and linguist, and the right to Jurij Grabrian (1800-1882). Above the façade, in the portal axis, there is a bell gable for the school bell.

In 1900, the Vipava savings bank also started operating in the new premises on the old square. The building, which was renovated in 1913 and electrified in 1925, was also the seat of the Vipava Agricultural Society and the old Vipava wine cellar.

THE CHURCH OF ST. STEPHEN is our "cathedral"

The parish church in Vipava dedicated to St. Stephen. His feast day is 26 December, when the traditional blessing of horses is held in Vipava. A Gothic church at first, it was later baroquised; it is decorated with frescoes by Franc Jelovšek, to which frescoes by Janez Wolf were later added in the lower part of the presbytery. He incorporated portraits of several people from Vipava well known at the time in the scenes depicting the story of St. Stephen.

There are only six of them in the world.

There are two truly EGYPTIAN SARCOPHAGI in Vipava

In the tomb of the Lavrin-Hrovatin family in the Vipava cemetery there are two Egyptian sarcophagi, made from red granite and discovered in the tombs of the courtiers of the 4th and 5th dynasties at the foot of the Pyramid of Khafren in Giza. They were brought to Vipava by a local named Anton Lavrin. He was a consul general, researcher and Egyptologist. The sarcophagi hold the remains of his parents and his son. Hieroglyphs have been preserved on one of the sarcophagi.

The mark left in the Vipava area by

Da Vinci visited Vipava in 1500 to study the possibilities of damming the Vipava River for defensive purposes. After that, at the beginning of the 16th century, he designed the defence of Friuli against a possible invasion by the Turks. He is said to have thoroughly studied the flow and course of the rivers in the region, as he was involved in the management of high waters and embankments, thereby contributing to a greater coexistence of humans and aquatic organisms. For this purpose, he created a defensive plan under which Turkish invasions would be prevented by flooding the valleys and building dams. A report from 1527 shows that Leonardo da Vinci ordered the construction of a movable barrier in the Slovenian part of the Soča Valley and in the Vipava Valley. Testimonies from his writings prove that he thoroughly studied the Vipava River in the territory of the Vipava, a tributary that originates and flows through the territory of Slovenia.

A scenic viewpoint that dates back to the 11th century, our

The Old Castle is the oldest castle in Vipava that bears witness to the rich history of the area. It was first mentioned in written records in 1154. It has changed owners several times since being erected. Its most famous resident was Žiga Herberstein (Sigismund von Herberstein), the author of the monumental Notes on Muscovite Affairs, in which he was the first to describe life in Russia in the 16th century. Once his teacher gave him the following advice: don't let a day pass without reading for at least an hour, so that you become an important man of his time. And Herberstein always followed this advice.

Visit Vipava so that you can see our beautiful and old town in person, take a stroll through the streets of Vipava and sit for a while in the Central Square or in the town park.

We also invite you to take part in our guided tours of Vipava with our local guide. Guided tours are held every Monday and Wednesday at 5 p.m. and every Friday at 1 p.m. On these tours you will get to know the architecture of Vipava, Lanthieri Mansion, the Winemaking Museum Vipava, the famous Vipava bridges and the seven springs of the Vipava River.

Winemaker for a day

Winemaker for a day