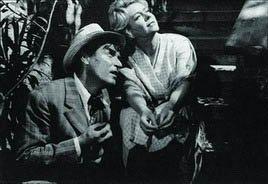 The upper Vipava Valley has always attracted various artists and creators with its location, history and appearance. Among them were and still are filmmakers who, when visiting our area, got inspired to create film sceneries and stories.

This is why we decided to present seven works by film and television artists that featured Vipava and the surrounding villages.

Tistega lepega dne is a Slovenian black and white comedy from 1962, directed by France Štiglic. It was based on the eponymous novella by Ciril Kosmač. The action is set in a village in the Slovenian Littoral that was controlled by Fascists during the interwar period. A few people know that it was shot in 1962 precisely in Podnanos. Almost every elderly local who participated in the filming as an extra or at least as a spectator can tell you about it. At the time, the entire village became a large film set.

More about this is available at: http://www.tic-podnanos.si/tistega-lepega-dne/

Ne joči, Peter is a Slovenian war film from 1964, directed by France Štiglic. It tells a story about two Partisan sappers who must accompany three war orphans and take them from the war zone to safety in the liberated territory. At first, the sappers are embarrassed as they had expected a more important task, but later they befriend the children, especially with the youngest one, Peter, who is the culprit for all funny and emotional scenes later in the film. Later on, they unintentionally manage to complete a major task as they blow up a stockpile of German explosives and ammunition. It was shot in Vipava and Podnanos, in Vrhpolje, on Nanos, as well as in the nearby Štanjel.

Tantadruj is a Slovenian drama film from 1994, directed by Tugo Štiglic. The screenplay was written by France Štiglic based on the eponymous novella by Ciril Kosmač. It is a story about the village fool Tantadruj, who wants to die by any means. Parts of the film were shot in Goče, at the Habe Homestead, as well as in Vrhpolje and Vipava.  The locals also participated in the film as extras. Nejc from the Tomažič Farm was among them.

Črni bratje is a Slovenian historical film from 2010, directed by Tugo Štiglic. The screenplay written by Marko Bratuš and Marjan Bevk is based on the eponymous story by France Bevk. The film depicts the fate of the secretive student anti-fascist organisation called Črni Bratje (Black Brothers) in Gorizia in the 1930s. Parts of the film were shot in 2010 in Vipava and Vrhpolje.

Matija Vertovec – the Great Mind of the Slovenian Nation, a documentary film (2015)

Priest, chemist, geographer, historian, astrologist, preacher, polyglot and the first teacher of Slovenian winegrowers. Matija Vertovec (1784-1851) was all this.

Very few people know that it was Matija Vertovec who talked France Prešeren into writing Zdravljica (A Toast), part of which later became the text of the Slovenian national anthem, and who encouraged Peter Kozlar to make the Map of Slovenian Lands. He was the first to write in Slovenian about viticulture and cellaring, about applied chemistry, astronomy and general world history. He informed the locals all around the Vipava Valley about the benefits of vaccination against smallpox and thus saved their lives. Part of the documentary film was shot in Podnanos.

Zdravljica, a docu-fiction film about the creation of the Slovenian national anthem. (2017)

More about this is available at: http://www.tic-podnanos.si/film-o-zdravljici/

A new love story takes you to the beautiful Vipava. The famous bridges of Vipava symbolise connections between the past and the present, broken family ties, grudges between friends and almost forgotten loves. Najini mostovi (Our Bridges) is a Slovenian romantic TV series that was first aired in March 2020. The story is set among the picturesque slopes of the charming upper Vipava Valley. Many scenes were shot in the centre of Vipava and in the village of Slap. The series is making a comeback to TV screens this autumn.

Did you know that Vipava and its surroundings were the set of so many film works? Do you recognise placed from the Vipava region in films? You are invited to watch them and then visit our region to relive the action from film. The locals will also be happy to show you hidden film sets.

Church of the Holy Cross in Gradišče pri Vipavi

To the birthplace of the Slovenian national anthem

Fishing in the Vipava Valley